Thomas was born on 20th April 2019 by emergency caesarean, although as far as we know this didn't actually cause Thomas any problems and we were both signed out of hospital the next day.

We had no reason for concern until Thomas was about 3 months old and we noticed that he was starting to grab objects with his left hand, but not his right.

After reading that early intervention can make all the difference, I took Thomas to the GP at 4 1/2 months old, but we were sent home and told to come back when he was 6 months old if the issue persisted.

At home Thomas continued to improve the use of his left side, but his right arm remained inactive, so as soon as he turned 6 months old I took him back to the GP and we managed to get a referral to see a specialist. At 8 months old we saw the specialist, although Thomas's issues didn't seem to cause much concern and we were told the issue would likely resolve itself.

By 10 months old, despite all his peers now being on the move, Thomas was still unable to move himself around and it was becoming clear that Thomas's issues extended beyond just his arm. I had noticed that his right leg was also weaker, but without him being able to stand or walk it was hard to quantify.

It was now early 2020 and we had no immediate follow up appointments on the cards, but a chance encounter with a paediatric doctor encouraged me to request a physiotherapy appointment for Thomas. In March 2020, the country went into lockdown. Like everyone else, we suddenly felt cut off from any support and there was no plan in place of how to support Thomas going forward. We didn't even have a diagnosis.

Then finally, a week into lockdown I received a phone call from a physiotherapist at Derby hospital, who explained that due to the pandemic they were no longer accepting new out-patients, but as Thomas seemed to have been 'missed' by the system, she asked if I would be happy to attend the hospital with Thomas as soon as possible. The physio was immediately convinced that Thomas's issues were not just limited to his arm but the whole right side of his body and that's when potential neurological damage was discussed.

At the age of 18 months old, I took Thomas for his MRI scan with the aim of confirming suspected cerebral palsy. I went to view the results a few weeks later and they confirmed that Thomas had suffered left side brain damage as a small baby due to an arterial blood clot in his brain which caused a stroke. The diagnosis was cerebral palsy. We've explored a number of avenues with regards to what may have caused his blood clot in the first place, but there has been no conclusion so this remains unsolved.

Going through all this in lockdown made it a very isolating experience. Most appointments, including physiotherapy appointments, were carried out by video calls and when I did attend the hospital, it was only myself allowed to accompany Thomas. I wasn't going to mother and baby groups and getting support from other mothers and for the most part we didn't even have the opportunity to do activities that could benefit Thomas's mobility such as swimming or soft play.

You get used to doing everything alone so it's easy to forget that there is support out there, that there are people out there that want to help you, so when I contacted Steps, it was the help we didn't know we needed. Unfortunately due to the pandemic Steps had also had to close it's doors. However, they had managed to set up 'virtual' sessions for the children. For our first session we were given a list of items to gather from around the house including shakers, a scarf, bubbles and a ball, and so we joined in our first session. After several weeks of joining in online, Thomas soon got familiar with the routines and also the staff at steps. The sessions were even interactive so that Thomas was encouraged to approach the screen and 'press a button' which the staff were holding.

Through the virtual sessions the staff at Steps got to watch Thomas learn to stand independently and then at around the age of 2 take his first independent steps on his own. For nearly a year Thomas continued to attend Steps 'virtually'. Then finally in September 2021, we attended our first 'real life' Steps session. When we walked through the doors, it wasn't completely new or unexpected to Thomas. We felt like we already knew all the Staff. We knew the routines and we knew all the songs and Thomas settled in really well.

At Steps a lot of time and effort is put into making the children feel at ease. We talk about various topics such as the weather, the day of the week and even stop for snack time. Thomas loves the outdoor area at Steps. He sees it as a playground, but everything is designed to challenge him, to increase his balance and mobility. Since attending the sessions, Thomas's confidence in his physical ability has really grown. Thomas does look forward to his Steps sessions but he knows that he's there to work hard. 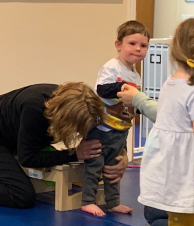 Thomas still has many challenges ahead of him, but he's not short of motivation and he always puts everything into his sessions and always gives every challenge his full effort and we have every confidence he will go far. We have a lot of hope for Thomas's future, and we are very lucky to have Steps to help Thomas to achieve his full potential.