After a turbulent pregnancy from the 20-week mark, Ruairi was born via emergency caesarean section on the 13th June 2018. Upon his arrival, Ruairi was immediately taken to the Neonatal Intensive Care Unit. On 17th June 2018, our world came crashing down around us as we were told rather abruptly that Ruairi was not expected to live. The team of doctors were not able to tell us why and despite multiple tests, they could not find an underlying cause for all his difficulties, including a neuropathy they had detected. We were told that Ruairi would never sit, crawl, walk, talk or feed independently and that it was in his best interest to let him 'die with dignity'. Fast forward 5 weeks, and Ruairi was discharged home with a life limited prognosis. Over the next 8 weeks, we managed Ruairi's needs at home with the support of our specialist health visitor and Diana Children's nurse but on September 6th 2018, Ruairi was rushed into hospital due to breathing difficulties. Ruairi was admitted and remained there for the next 12 weeks where an amazing team rallied around him, determined to find what was causing his breathing difficulties as well as an underlying cause for his neuropathy. 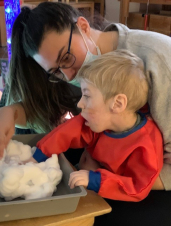 Whilst they were able to diagnose a cause of his breathing difficulties, they were not able to determine an underlying cause of his overall complex needs. In his first 6 months of life, Ruairi and I were not able to attend the typical baby groups that I had done so with my two girls due to the complexity of his needs and towards Christmas 2018, I realised just how isolated I had become as a Mummy and how desperate I was to help Ruairi achieve whatever he could so that he could have the best quality of life possible. Discussing this with our specialist Health Visitor, she suggested I contact a lady called Indila at Steps Conductive Education Centre to explore whether they may be able to offer Ruairi help and so I did that very same day. Indila listened to my explanation of Ruairi's needs and invited us for a trial session in January 2019. 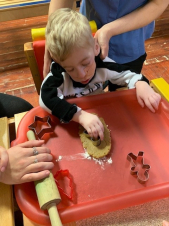 As Ruairi and I walked into the Steps building for the first time, I remember feeling quite anxious. At that point, Ruairi required regular suctioning and would often vomit, and I was worried how others would react to that. However, my anxieties faded almost immediately once we were in. Indila and her team welcomed us with open arms and the other parents there embraced us for all that we were; vomit and all! It was like having a home from home with family that just got us! No-one stared when Ruairi needed to be suctioned (even if we were mid-song) and people were there to share the burden when Ruairi was having a rough day.

Since our first visit, Indila and her team have worked wonders with Ruairi and today, he is making attempts to sit unaided, rolling 360 degrees and navigating himself around a room, commando crawling, weight baring on his legs whilst taking reciprocal steps when supported by an adult, enjoying small tastes of food and communicating with us on a level we NEVER thought he would. We truly believe that without the support he gets from Steps, Ruairi would NOT be where he is today and for this reason, we will be forever grateful to Indila and her team. 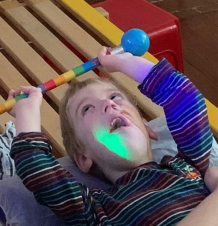 Since March 2020, a lot of Ruairi's therapeutic input and support from a range of health professionals has been 'put on hold' due to the COVID19 pandemic. Steps, however, have been the one constant support for Ruairi during this time and have offered daily sessions via Zoom, ensuring that he has continued to make progress and has not lost skills that he had learnt prior to the first lockdown. In a time where we had to self-isolate and lost contact with a wider support network, Steps have been a vital lifeline for us in terms of contact with 'the outside world' and we cannot thank them enough. 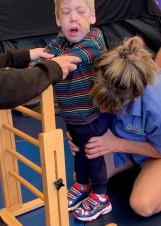 Indila and her team do not really appreciate just how special they are or just what a difference they make to the lives of the children and families they support but I want them to know that we (and so many other families) would be lost without the love and support they show us. If I could put all I want to say to them into one sentence, it would be 'Thank you for ALL that you have done for Ruairi; for giving him a better quality of life and for giving us HOPE of a brighter future'.