On 9th July 2018, Orlaith Frances was born. I'd had an uneventful pregnancy with all scans coming back normal. Other than her being a bit of a whopper and struggling with blood sugars, she appeared to be a healthy baby girl.

Four weeks later Orlaith started having diarrhoea and, in the space of 24 hours, we'd gone through nearly 30 nappies. I just knew something wasn't right. We ended up in A&E at our local hospital and were then admitted to the children's ward; the diarrhoea was suspected to be a cow's milk allergy. We were then floored by the news that the doctor had heard a heart murmur and Orlaith would be sent for a scan in the morning. All night we were monitoring fluid in and out and she was constantly having her vital signs checked. Her BP was significantly lower in her legs than in her arms – I think then I knew this was something serious.

The next day we had the scan and, after what felt like hours, the doctor came to speak to us. Orlaith had two holes in her heart and a narrowing of her aorta. They had been seeking advice from the specialist congenital heart team at Glenfield and they wanted to see her. They had a bed for us the next day, so we were transported over in an ambulance.

When we arrived at Glenfield, Orlaith was scooped out of my hands and whisked into a room where there were 5 doctors and 3 nurses. Wires were attached, scans and X-rays taken in the space of a few minutes. I was really scared. The doctor then sat with us and told us that she wasn't in immediate danger and therefore didn't need emergency surgery, but she would need it in the next few months. They wanted her to put more weight on and to get stronger for the surgery. So, the next day we were sent home, with what felt like a ticking time bomb. The next 8 weeks were hell. I isolated myself with Orlaith at home to avoid infection. We fought and fought to get her to feed and put on weight, she ended up in hospital numerous times in between for lack of feeding. Eight weeks later it was clear that she was becoming very ill and in heart failure. The surgery had to be done. So, on 9th October 2018, Orlaith had open heart surgery to correct her heart defects. Whilst doing her surgery they found a fourth defect which was also corrected. She spent five days in PICU and a further three days on the high dependency ward before we came home.

She seemed to be getting stronger every day and feeding better, but 4 weeks later she caught a cold and completely stopped feeding. We were readmitted to hospital for another week and, in the end, we came home with a baby with a feeding tube. She had the feeding tube for another two months until she finally started taking good amounts of milk.

At six months old she started taking some solids. This was a big turning point. She stopped sleeping so much and became a lot more aware of everything around her. It was at this point that I started to notice difficulties she was having. She couldn't roll over and was getting very frustrated with things. I could see that the desire was there for her to play but she just couldn't. Every day she would spend large portions of the day screaming in frustration and I was really struggling. My Mum kept talking about a place called Steps and she said I should contact them.

Up to this point my concerns about Orlaith's development had been brushed off medically and I was told over and over "she'll catch up, it's just because she's had surgery". I second-guessed myself and felt like I was making a mountain out of a molehill and so didn't think she would qualify for Steps' help. One particularly difficult day, I'd just spent the day in tears. I wrote it all down and sent it in an email. I didn't think I would be able to talk on the phone; it was so hard saying these things out loud. Indila emailed back the same day and invited us for a taster session the following week.

My mum came along with me to the taster session; I was nervous and felt very emotional. The second that we stepped through that door our lives changed. We were welcomed literally with open arms; it was clear straight away what a warm friendly place Steps was. We went through to the playroom and got chatting to other parents, all of whom were so welcoming and put me at ease. Then we took part in a session. It was all a bit of a blur, but it was wonderful. Orlaith's stamina wasn't great so she fell asleep towards the end, but it was just marvellous. When I got home, I just sat and sobbed. It had been an overwhelming afternoon and I was so grateful to have met people who just seemed to get it. They understood what Orlaith needed, they didn't second guess what I was saying or make me feel like I was an overanxious mum. They understood what I needed, and from that day, I felt supported.

We continued going to Steps every week and Orlaith got stronger and stronger. She would still fall asleep a lot, but her stamina built up. She started to roll over, then learnt to sit up and by 12 months she started to crawl in her own unique way. I am 100% convinced that Orlaith would not have achieved these milestones when she did had it not been for Steps. Going every week to Steps is magical, in a fog of worry you get to see the small progress that comes with each session. 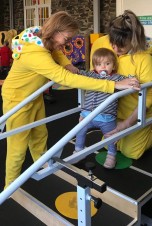 My worry continues with Orlaith; as she hits one milestone something else shows itself as a concern. Physically, she is really catching up now, but cognitively she finds some things difficult. Her learning and understanding are behind, and we have struggled to gain medical help for this. This is another example of where Steps is such a lifeline. It bridges the gap between what is available through our stretched NHS and gives vital support to families like us. Steps is a solid, reliable support system; I have asked for advice and help on so many occasions and it is always given so graciously.

Both myself and Steve have suffered with mental health problems since having Orlaith, going through the trauma of seeing your child so close to dying is a hard one to get over. I have suffered with PTSD and anxiety and Steve struggles too. It's so easy to get lost in a sea of hospital appointments, worry, anxiety and trauma. So many of us must be more than just parents – we must play the role of nurse, physio, advocate and so much more. Steps, for me, provides a chance to feel like Mum again. Just Mum. And that is such a gift.

Steps has helped me cope with my struggles; coming every week, being with other families that understand, and having the support from the staff is such a comfort. I suggested Steve started coming along to Steps too so he could see the magic of it first-hand. He commented on how wonderful it is to see me feeling so at ease and comfortable and how Steps seemed like a big family. That is exactly what it is – the staff are phenomenal, the love they have for the children and their families is humbling.

I consider our family to be very lucky to have been able to access Steps. We have taken them into our hearts as much as they have welcomed us into theirs. Thank you.