I would like to tell you a story about a little boy called Jude. On New Years Eve 2008 we received the most glorious news during a routine 12 week scan - we discovered we were expecting twins! It was quickly identified the babies were identical and we were told from the offset to be prepared for complications, in particular for a condition called Twin-to-Twin Transfusion Syndrome (TTTS). This is a condition only present in identical pregnancies – since the babies share a placenta, sometimes they do so unequally; where one twin will receive too much blood and nourishment from the placenta while the other receives too little. But the risk was small, in fact tiny. What were the chances of that happening to us? So there I remained in my bubble of bliss…

Everything seemed to going well, until during a routine scan at 23 weeks TTTS was identified. Within a week, the condition progressed rapidly, from mild to severe. We had to make the hardest decision of our life… to let nature take its course or to intervene. There was no hesitation…. we had to do something to give our boys the best chance of life. We were referred to a specialist in London where we had laser treatment to separate the blood vessels connecting the babies. It was an invasive procedure which was warped with complications… and sadly took the life of one of our boys, our beautiful Benjamin. Tragically the trauma of the laser treatment triggered labour and on Tuesday 24th March 2009, at only 25 weeks old, Jude was born weighing only 1lb 7oz.

Jude was the size of my hand, he was so very poorly when he was first born. He wasn't breathing and was dusky in colour. They rushed him to neonatal and prepared us for the worst. At only a few hours old, Jude had a brain scan that identified a massive bleed on the brain. For 20 weeks, Jude remained in the neonatal unit. And it was a rocky 20 weeks, full of dramas and heartache. He had a perforation of the bowel at a week old, needing part of his intestines removed and a stoma fitted. He had a heart operation at 4 weeks, he had infection after infection, feeding problems, he struggled to control his blood pressure, seizures.

Each time something would happen, we would be taken into a little room and the same conservation would be said… 'because of the severe bleed Jude has had to the brain, if he doesn't start to pick up you will need to consider switching off the machines'. Countless times this was said to us… but each time we would leave the room in tears to see an angry little scrap of a baby fighting for his life! Although he was very poorly, Jude never once gave up.

A week before leaving the neonatal, his final brain scan showed that his bleed had developed in a way the doctors had hoped it wouldn't… the brain had collapsed into the pockets of cysts created by the bleeds. We were told to expect a severe disability, both mentally & physically. After 19 weeks living on the neonatal rollercoaster, this news was like a slap in the face. I remember sitting in the parents room, numb, unable to cry anymore… when I saw a little flyer peeking out from behind some others. I saw this little flyer as a sign. It was for Steps, and I remember thinking 'OK, so he has a disability… but that doesn't mean he can't lead a full and happy life. Why else would there be a place like Steps for these children?' 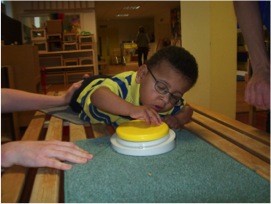 So into the real world we were catapulted… and next followed appointment, after appointment… It was a busy first year and Jude seemed to be doing OK, but something was missing… I felt we needed to be doing more for his development. 'Normal' playgroups weren't right for Jude, play just wasn't tailored towards children with special needs. It seemed, apart from Menphys special nursery, there just wasn't anything available for us. I couldn't accept this as an answer, we had to do something. I then remembered that little flyer from neonatal.

That first phone call was a big step for me, it was acceptance and realisation that my son was disabled and was needing specialist schooling. I was so nervous making the call, but hearing Trish's kind voice talking back put me at ease instantly. There was no hesitation, an initial visit was arranged, a meeting with Indila… and I was hooked!

Of all the appointments Jude has and all the therapies he endures, Steps is where it all comes together, not only for Jude but for me too. Not only are the carers working at Jude's physical and learning needs, he has such fun in the process. And it's the little achievements which are precious, those milestones which would have gone amiss at a 'normal' playgroup. During 'hello time', children are encouraged to press a big mac button by themselves. When little Lucy from our Tuesday group pressed it without needing to be coaxed, I felt Lucy's mum, Nicola's, joy. I was so happy, not only for Lucy but for her mum too because I can relate and I understand what a massive deal that was. And I know I shared this delight with the carers too, which is what makes Steps so very special. Every little thing these children do is an achievement, however small. My 2 year old can walk on his hands, juggling potatoes, reciting the words of Shakespeare and it's 'oh well done Micah…'. Jude picks out a little knitted doll from a bag and pops it on the number board, I'm calling the family, marking this in his achievement book!

Steps has and will always play such a massive part in our lives. In the year and a half Jude has been attending, I have seen such a massive change in him. His capacity for learning has improved incredibly, I am so proud of what he has achieved since attending Steps. So much so he likes to try and run the class!

He is now such a happy, sociable, inquisitive little boy; attending Steps has given Jude so much confidence. And I am so very grateful for the support Steps has given me, too. I now have a network of very special friends. I go to Steps and for the 3 hours we are there, everything is 'normal', which, as a parent of a child with such complex needs, is so very precious.

Thank you for reading our story.